The good news for banks is that most people have more faith in them than in Congress and the media. The bad news is that’s still not very good.

In fact, surveys taken over the course of 2016 show a low level of confidence in the nation’s financial institutions, with most expecting danger ahead. Some 74 percent believe a crisis in the U.S. will unfold over the next five years, according to numbers released Thursday by the Brunswick Group.

“The results indicate that banks remain in a permanent state of crisis, despite significant efforts by the sector to shed liabilities, increase capital buffers and reduce risk-taking,” Brunswick said in a survey of attitudes in the U.S., U.K., France and Germany. The surveys took place this year from April 12-22 and Sept. 8-15.

Brunswick sought both to gauge feelings regarding where the banks stand and what impact heightened regulations have had on the industry. The results come amid worries over Deutsche Bank‘s capital position and the Wells Fargo scandal in which the San Francisco-based bank illegally sold products to millions of customers.

Banks also should be smaller, with 63 percent of U.S. respondents saying they prefer smaller institutions.

Banks “are currently viewed as part of the establishment and therefore part of the problem,” Brunswick said. “Showing customers, investors, politicians and regulators that banks are accountable for their actions, committed to their customers and focused on providing solutions to the economic needs of individuals and the global economy will be critical in getting banks out of a perpetual state of crisis.”

Shameless pitch:  At Viking Equipment Finance we specialize in providing non-bank equipment financing solutions to small and mid size business owners in most industries for both new or used equipment.

The problems with banks are part of larger worries about the state of the global economy. The September survey found that 58 percent of Americans believe the global economy has not recovered from the 2008 financial crisis, and the number was as high as 68 percent in Germany. The primary reason U.S. respondents cited for instability was too much consumer debt, followed by growing inequality.

Gallup took a poll in July to see what Americans thought of various professions, and the results weren’t pretty for banks: 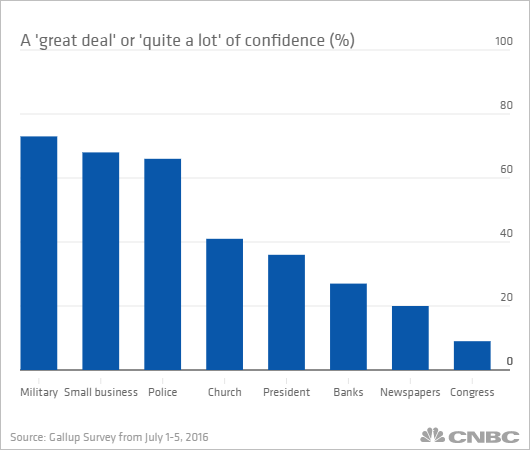 The survey also asked respondents to choose three things that would make the banking systems safer.